And for a comprehensive look at Radcliffe at the time of WW1 please see the Radcliffe WW1 site .

Historical Maps of Radcliffe on Trent and Lamcote

Click on any of the maps below to view an enlarged version. In 1710 Gervace Rozell Esq. decided to sell his Radcliffe and Lamcote lands, a total of over 642 acres.  He employed a Thomas Hand to survey his estate and compile a map showing who his tenants were, the extent of their rented holdings and how much rent they paid per year to the estate of Gervace Rozell.

Thomas Hand’s work resulted in The Rozell Map[1], which is the oldest known map of Radcliffe on Trent.  It shows those parts of the village that were owned by Rozell, however any land which he didn’t own is either not shown or is not drawn in any detail, therefore the map is not a complete record of the area.

The Rozell map clearly shows that his nearest, and by far more powerful, neighbour – Evelyn Pierrepont, 5th Earl of Kingston, [later to become Duke of Kingston upon Hull]  – was already encroaching on Radcliffe land.  The area called Lamcote Lees, which is the large green field furthest South on the map, was rented to a Thomas Knight but, inexplicably, Lord Kingston owned 3 separate strips of land in that field as well as other areas dotted about the village.  In the early 18th Century farming would have been of the open field system so that what looks like a large field on the map would in reality have been sub-divided into thin strips of arable land worked by peasants who would have paid rent to Thomas Knight.  The fact that Lord Kingston owned bits of a field wouldn’t have been as inconvenient as it would be nowadays.  The photograph below from 1995[2] shows the typical ridge and furrow that has resulted from hundreds of years of ploughing using the old open field system. This can often be seen in fields that today are fallow. With thanks to Radcliffe Local History Society

This map is a facsimile of a map that was produced approximately 75 years after the Rozell Map.  Although the general layout of the centre of the village is the same it shows that there were far more properties, especially to the East of the village, although unfortunately there is no indication of who owned them or their use.  We do know that Radcliffe had a mill and a brewery as well as other trades necessary in a small community but there is no hint on this map of where they were.

The map itself was drawn in 1984 by Pamela Priestland of Radcliffe on Trent Local History Society and was designed to be overlaid by a contemporary map, [1984] so that a direct comparison of village layout could be made.

This map was produced by William Attenburrow, a land surveyor from east Stoke who produced maps of many villages in Nottinghamshire as well as the town of Newark.

The Inclosure [Enclosure] Act of 1773 enabled major landowners to petition Parliament for permission to enclose their land and remove the right of commoner’s access.  It did away with the old open field system.

William Attenburrow was a surveyor and Government Commissioner who surveyed land, recorded who owned what and then distributed it fairly in discrete fields, ensuring that there was a fair division of good and not so good land.  To do this it was necessary that land ownership was clearly recorded.

Although this map is undated it was probably produced in the last 10 or so years of the 18th Century as some land is clearly divided whilst other areas are still part of the open field system.  In addition, some of Attenburrow’s maps are dated and most of them were produced between 1780 and 1790. 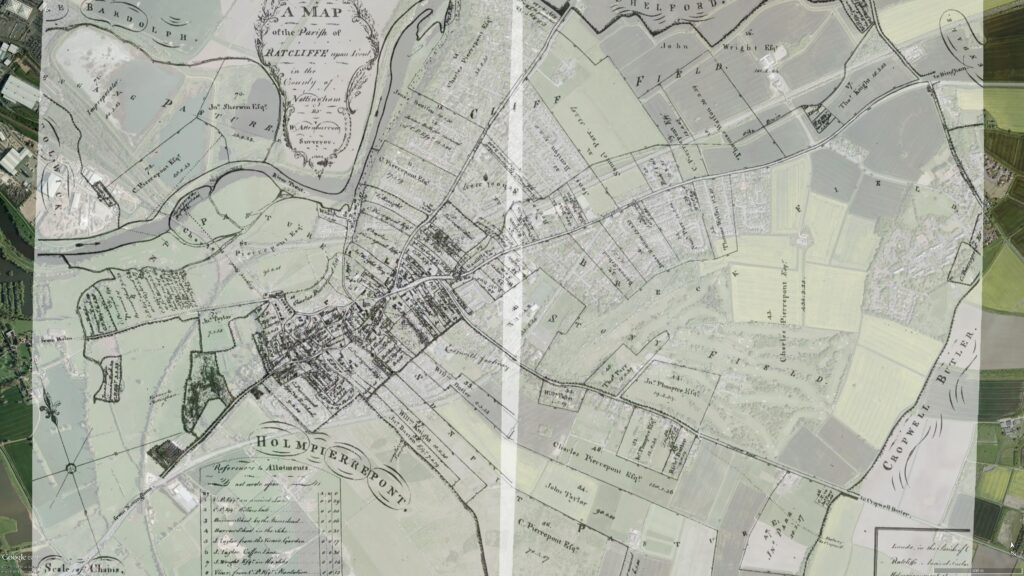 This is just a small part of a huge map of Nottinghamshire villages and parishes.  The map includes a drawing of Newstead Abbey.  Newstead Abbey was owned by Lord Byron, an extremely popular poet at this time, which may indicate why his ancestral home was chosen instead of other famous landmarks.

Although undated therefore, this map was probably produced in the early 19th Century.  The map clearly shows that the land around Radcliffe was now enclosed into small fields instead of strips.

This is the so-called Hunting Map of Belvoir, surveyed by William King circa 1805. With thanks to Peter Foden. This aerial photograph was produced in 2000 as part of “the Millennium Map”.  The whole of Britain was photographed from the air as a modern “Doomsday Book” so that every building and every field was recorded.

The map shows the west side and centre of Radcliffe but not the east and the Harlequin area.